Weber Shandwick has been honoured in eight categories at this year’s PR Awards Asia, including Network of the Year and Campaign of the Year.

Our especial congratulations to Weber Shandwick Hong Kong and Managing Director Albert Shu, whose work was endorsed in three separate categories, including Campaign of the Year.

“I am both proud and inspired by the outstanding work that our people, together with their clients, have achieved,” said Baxter Jolly, CEO of Weber Shandwick Asia Pacific. “Recognition of this kind is incredibly sweet and I am so very happy for everyone at Weber Shandwick for their well-deserved wins. Congratulations to all. You earned it.”

Held annually, the PR Awards Asia shine a spotlight on the work, communicators and agencies of Asia Pacific that define cutting-edge thinking and drive the public relations industry forward. Weber Shandwick offers our thanks and congratulations to Haymarket Media for their continued support of the region and the broader marketing communications industry. 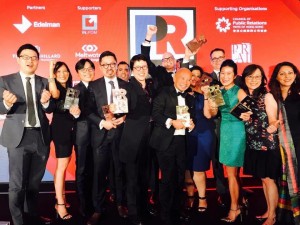