Spikes Asia: The Why of Chinese Consumer Behaviour

This article originally appeared in The Holmes Report.

“It’s a great idea – but it will never work in China.”

If you’ve ever worked on a global or regional communications campaign, you’ll recognise it. It’s a piece of feedback that comes up again and again about our country. Usually, it’s accurate. It won’t. Put simply, China really is a very different and unique market.

But, why do so many professionals struggle to connect with Chinese audiences? We’re not aliens, after all. Like most other markets, we still love a good story (especially with a happy ending). Like most consumers, we still respond to authentic and genuine communication.

So, what is missing?

In my experience – cultural understanding.

Many people understand, for example, that China behaves differently to most markets. You may know, for example, that we are one of the most advanced e-commerce and social media markets in the world. You may know that we are very quick to embrace new technologies and behaviours. And, if you’ve ever tried developing a story for our region, you’ve probably discovered that we don’t tend to respond to narratives of conflict and argument.

This is what many communicators miss when thinking of China. Professionals often fail to truly understand why we act the way we do – why China is China, so to speak. And, in developing strategies that only play to these surface ideas (instead of the motivations beneath them), their campaigns often struggle to fully engage their chosen audiences. 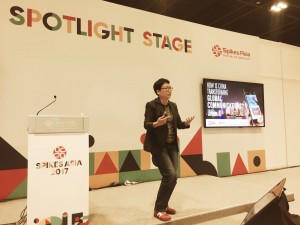 Lydia Lee, presenting at The Spikes Asia Festival of Creativity in Singapore.

After all, there are always reasons why audiences act the way they do. China isn’t any different. Some explanations are simple: We gravitate towards mobile because PCs didn’t arrive until quite late in the PC lifecycle. We didn’t have as much baggage to discard when mobile technology arrived in China. Then, there are more complex explanations: We engage with influencers and ecommerce because, for Chinese citizens, these things allow us the freedom of choice to decide who we want to be – and have fun doing it. These can be new and exciting experiences for Chinese audiences.

And, of course, some trends can only be understood through the lens of China’s culture and history. Why are Chinese consumers so quick to embrace technology? Because, through offering speed, flexibility and information, technology provides Chinese people with a feeling of being in control. Around the world, consumers in all markets are feeling buffeted by an era of change and upheaval. China is no different – but, with a billion people and a fast-growing economy, those feelings of uncertainty are even more profound and widespread.

The true meaning of technology for Chinese users? The ability to feel in control in an era of anxiety.

As you can see, there’s considerable difference between thinking of Chinese trends and thinking of the motivation and people behind them. Is your strategy based on engaging a market that’s heavily engaged with ecommerce and influencers? Or, are you engaging a population of individuals who are enjoying new ways to express their identity and connect with authentic people like them?

And, often, it’s that difference that separates a good strategy from a great one.

For all of our Spikes stories and insights, see our special Spikes Asia content hub.

For more information on the Spikes Asia Festival of Creativity, see here.