Big wins at the In2 SABRE awards 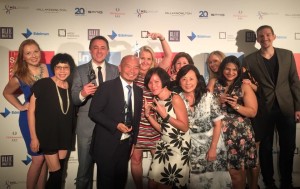 Our Australia team picked up three awards for their work on the Australia’s Future Submarines, Nespresso Milk Expertise and Covidien’s VTE Awareness campaigns.

Finally, China and Australia were also awarded Certificate of Excellence’s – China for their work with Amazon Kindle, and Australia for Covidien again, as well as ibis Hotels.